The following pictures illustrate details of the structure of the World Trade Center Towers which were attacked on 11th September 2001.

Below, the remains of the external columns and their horizontal stiffening members can be seen. Note that the columns were prefabricated into an assembly of three columns over a height of three storeys. These prefabricated sections were bolted together in-situ. The bolts unzipped at the horizontally spanning plates (known as spandrels) as shown below so as to reveal the original prefabricated sections. Further down this page, a diagram shows a cross section of one of these columns. The cross sections shows that three sides of each column were protected from fire by 2 inches of sprayed concrete whilst the fourth, the inner face, was protected from fire by a 2 inch layer of vermiculite plaster (lightweight plaster). The picture below shows that the sprayed concrete is still attached to the columns but the vermiculite plaster has gone. 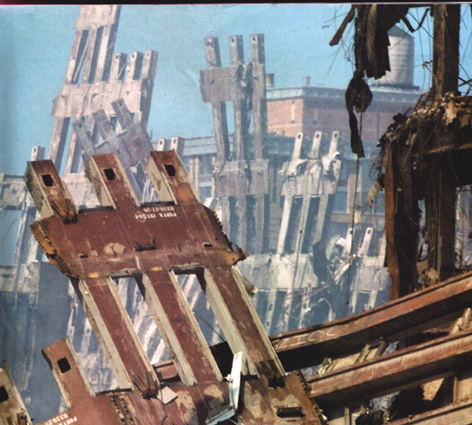 The picture below illustrates the extent of the devastation to the Towers and the surrounding buildings. The World Trade Center was owned by The Port Authority of New York & New Jersey. They had used the material excavated from the underground floors of the development as land reclamation material - go right to the end of this page to see the excavation in progress. The waterfront was originally along the line of West Street so numbers 2 & 3 World Financial Center are constructed on reclaimed land. 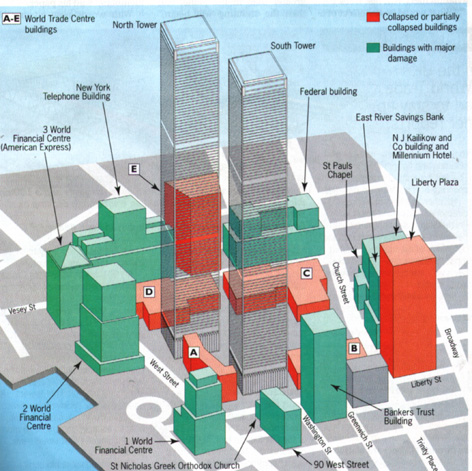 The diagram below shows how the truss beams supporting the insitu concrete floors are connected to the perimeter columns. The concrete floors are constructed over corrugated steel permanent formwork, The beams span all the way from the external columns to the building core a distance of 20m. This allows clear rentable space which can be configured at will using non-structural partitions. What are not shown below are dampers connecting the lower chord of each truss to the external columns. Further down this page, a diagram of the dampers shows how wind induced vibrations are damped out. Also, the illustration below is inaccurate in that it shows a truss arriving at each external column whereas in fact they met each second column as shown in the lower picture. At each second column, there were two parallel trusses spaced 7 inches apart. 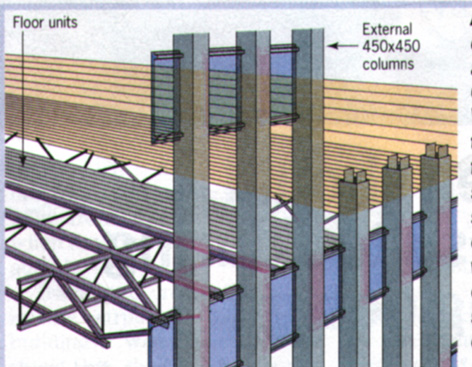 More accurate details of the floor are shown below. Each truss comprises four angle sections as the upper chord and two angle sections as the lower chord. The inclined members comprise a bent length of round bar which is welded between the angle sections. The bent bar protrudes above the upper angle sections and into the 4 inch thick concrete floor to act as a shear key. At the perimeter of the Towers, the lower chord is connected to the columns by the damper illustrated below. The corrugated steel decking directly above the trusses acts as permanent formwork and also acts compositely with the concrete to sustain floor loads.

The damper drawn below connected the lower chords of each pair of floor supporting trusses to their external column support. The viscoelastic slabs sandwiched between steel plates acted as dampers to eliminate any feeling of motion for building occupants. Horizontal motion was converted to heat within the viscoelastic material. 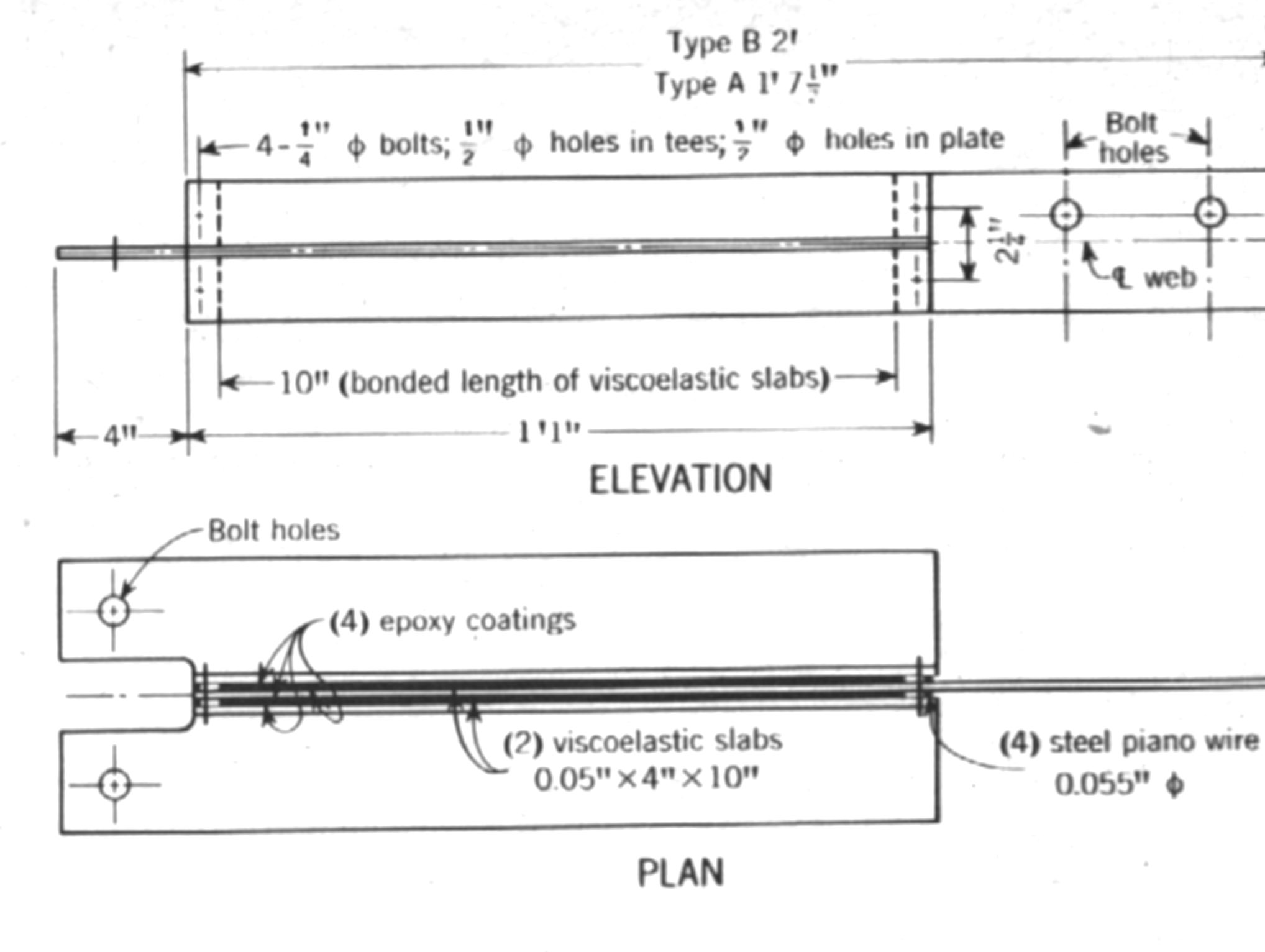 The picture below taken in 1970 shows the construction of the North Tower. Four cranes mounted on towers running all the way down to the ground in lift shafts within the core erect the external columns in their prefabricated sections. The core comprises steel beams and columns with reinforced concrete infill panels. Unusually, the core resisted vertical load only, the horizontal forces being resisted by the perimeter columns and their connecting spandrels. 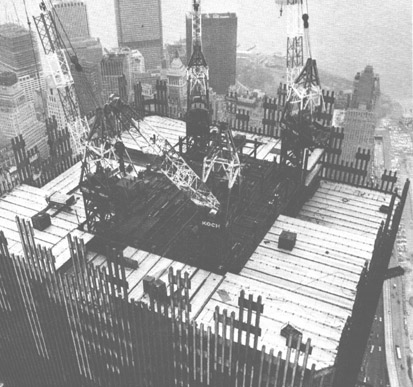 The core occupied a substantial part of each Tower because of the large number of lift shafts and stairways. There were 100 lifts in each tower functioning as follows. Vertical transport within each tower was built round the concept of Skylobbies. 23 high speed lifts took passengers to one of two Skylobbies on Floors 44 & 78 at 1,600 feet per minute. From there, 72 local lifts allowed access to all floors. A special express lift took passengers directly to the observation deck. There were four goods lifts. The floors directly above and below Skylobbies were accessed by escalators and goods lifts. The diagram below shows the passenger lifts. 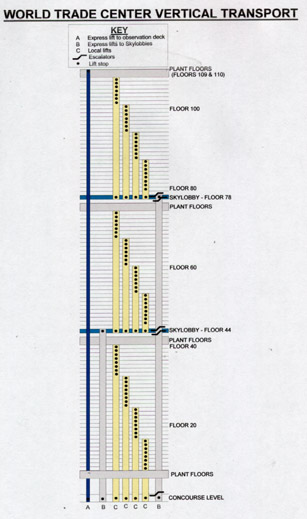 The external columns carried some of the dead and imposed floor load (from those parts of the floor nearer the perimeter than the core) whilst the truss beams carried the remainder of the floor loading to the core. Unusually, the perimeter columns also carried the horizontal loads. The design took into account a wind gust of 140mph (63m/sec), whereas it is usual to design for only 100mph (45m/sec). Also, the designers allowed for impact by a Boeing 707 aircraft weighing 150 tons. This is why the North Tower survived for 90 minutes and the South Tower survived for 47 minutes. The dramatic final collapse of each tower was a result of the fire melting the steelwork in the core. Steel begins to soften at 800 degrees Celcius and the fire temperature was over 1000 degrees Celcius.

There has been some criticism of the structural design of the towers but I believe it is misplaced. The towers were particularly strung, stable and robust. This is why they survived the impacts for sufficient time for upwards of 20,000 people to escape. Other buildings have suffered much less impact and have collapsed instantly. 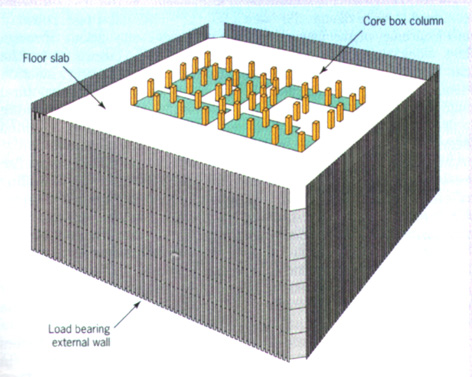 The way in which overturning is resisted is illustrated below.

The picture below gives an impression of the size of the perimeter columns and the size of the windows between them. The view is from the restaurant at the top of the North Tower overlooking Brooklyn Bridge which spans the East River. 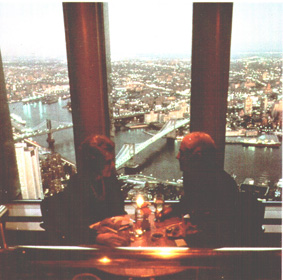 Below, we can see the cross section of a perimeter column. Fire resistance is provided by 2 inches of sprayed concrete including ceramic fibres around three sides of each column. The interior face of each column is fire protected with 2 inches of vermiculite plaster. Aluminium covers surround each column and the window frames are fixed to these covers. 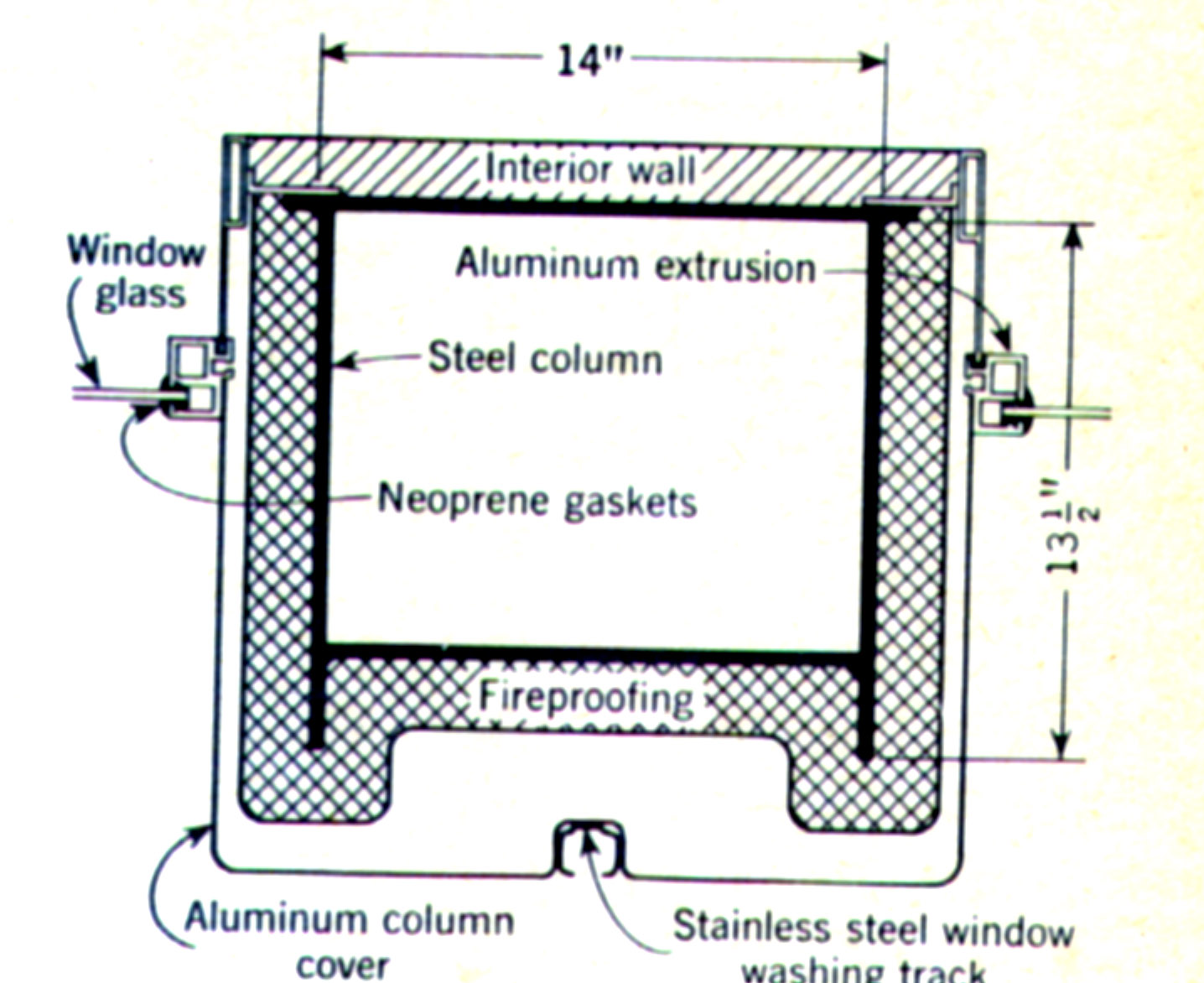 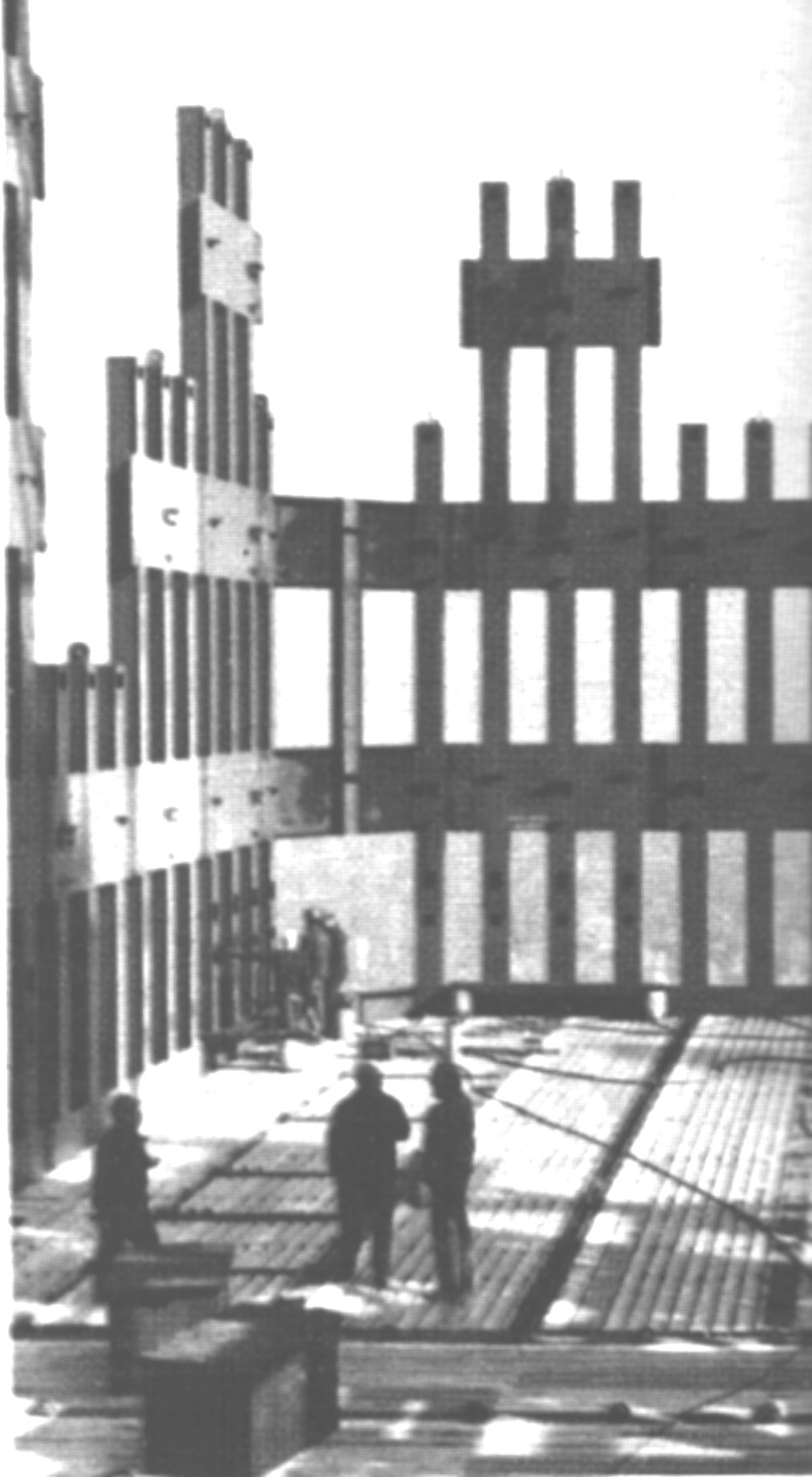 Below, the excavation of the World Trade Center basement continues. The picture is taken from a 1971 advertisement for the specialist foundation engineering technique used. 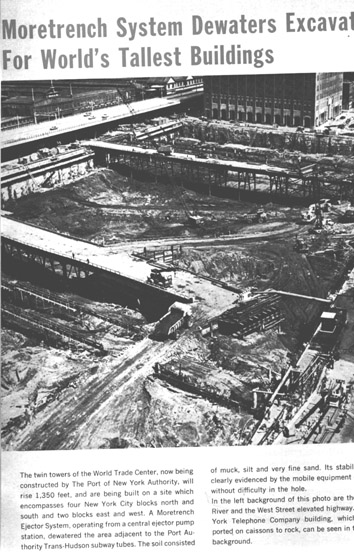 Each floor of each Tower was approximately one acre in area

1.2 million cubic yards of earth and rock were excavated in the construction

23.5 acres of land were reclaimed from the Hudson River using this material