Bridges in Newcastle and Brisbane

Here are some pictures of bridges in Newcastle and Brisbane. The first two show the William Jolly bridge in Brisbane and the second two show the Tyne Bridge in Newcastle. Note the similarities between the two bridges. Both comprise road bridges over rivers with the road deck suspended from an arch. The Tyne Bridge is constructed from steel and the arch is parabolic. The William Jolly Bridge is constructed from reinforced concrete to a circular arch shape. Note that the Tyne Bridge was constructed immediately prior to the Sydney Harbour Bridge by the same contractor, Cleveland Bridge & Engineering Co. Ltd, of Darlington. Many consider it be be superior aesthetically to Sydney.

The picture below shows the Tyne Millennium Bridge being brought from its fabrication site at Wallsend on Tyne to its permanent location downstream from the Tyne Bridge on the morning of 20th November 2000. It is unique in that it opens to shipping by the rotation of the whole bridge so the curved walkway becomes a second inclined arch, connected to the main arch by tension members. 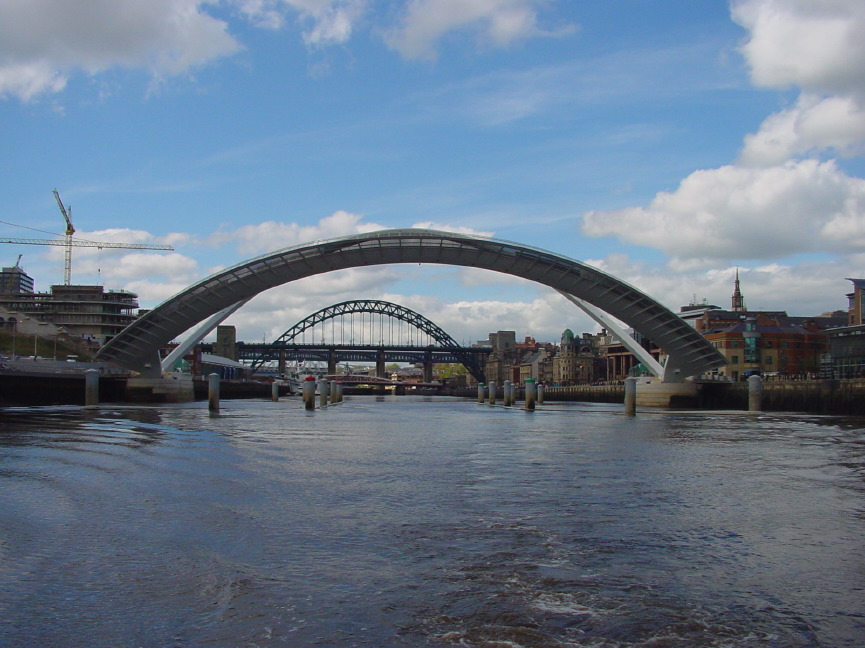 The three pictures below illustrate a pedestrian bridge opened in 1995 following the widening of the A1058 through Jesmond Dene. The new bridge was built in the same style and in the same proportions as a previous smaller pedestrian bridge spanning the original narrower road. This means that the new bridge has unusually high handrails and can appear out of scale. It was prefabricated from steel and was delivered to site in two halves with a longitudinal joint. The two halves were joined together with plates beneath the deck, as seen in the third picture.Note the rectangular hollow section handrails in the second picture. The diagonal side truss members are largely decorative. Only a few of the members act structurally and these can be readily located on site.

Aquaducts are rare in the UK and the example shown in the next two pictures is Thomas Telford's 1832 bridge over the A5 between Wolverhampton and Shrewsbury. It carries the Liverpool and Birmingham Canal, now a tourist canal, over the road. The water is 1.5m deep. Students often forget Archimedes Principle when designing aquaducts. The live load is the weight of the water directly over the span (i.e. assume no boat present). Forget about the weight of the boat. For water of depth 1.5m, the unfactored live load is 15kN/m2. A typical 14m long narrow boat weighs about 120kN.

The four pictures below illustrate the through girder bridge which carries the London-Edinburgh railway (the route of the legendary Flying Scotsman) over the Coast Road - a busy commuter road connecting Newcastle upon Tyne with the residential towns on the East Coast. The railtrack is laid on ballast which is placed in a steel trough between the side trusses. The cross bracing in the centre truss panel is to ensure stability against wind loading.

The truss members are fabricated from plate sections riveted together. The construction of the principle elements of the bridge follows shipbuilding tradition - the bridge is 2 miles from the former Tyne shipyards in Wallsend.

Another riveted steel bridge, but this time, the principle members comprise angle sections.